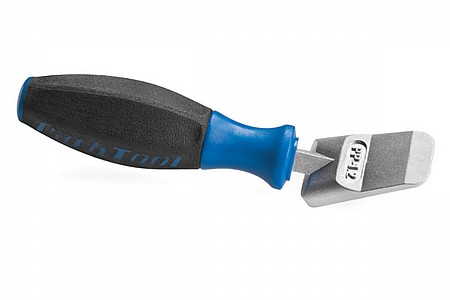 After waiting over a month for an ï¿½lbsï¿½ (i live in rural Texas and itï¿½s a two hour drive) to do some maintenance including replacing brakes and a tuneup i decided to learn to fix more problems at home.

Different rotors from different brands have micrometer differences but itï¿½s enough to run and squeak if you donï¿½t reset the pads. I tried using credit card shims , moving the pad mounts, but nothing was 100% effective. A friend said they had the same issue and the lbs they used told them but the park tool. He said it worked wonders so i bought my own. First try NO SQUEAK!

Have used it on my other bikes and it is the most consistent fix for rubs Iï¿½ve encountered. If your rotor has warping issues it wonï¿½t fix that, you may need a truing tool if itï¿½s even fixable.

A cheap addition to your workplace that can save you headaches and cash when pads and rotors last longer.

Was this review useful to you? Yes/No
Thank you for your feedback.
Useful Tool
by BigHill

Works as advertised & easy to use

Was this review useful to you? Yes/No
Thank you for your feedback.
Bulletproof.
by Merlin
Portland, OR

Finally got my first bike with disc brakes so I bought this tool for use when changing pads. It works. It's a simple tool after all.

Was this review useful to you? Yes/No
Thank you for your feedback.
Disc brake must have tool
by MikeMo
Cycling Enthusiast
East Tennessee

Makes disc brake removal and install easy. Simple must have tool for the home mechanic.

Was this review useful to you? Yes/No
Thank you for your feedback.
Helpful, purpose-built tool
by Anonymous
Cycling Enthusiast
Somerville, MA

While not strictly necessary for replacing disc brake pads, it is always helpful to have a purpose built tool. Park Tools seem to be consistently well-designed and made.

Want to save on all your TriSports purchases? Sign up here for exclusive discount offers. 01