PRICE MATCHGIFT CERTIFICATESJOIN EMAIL LISTSALE ITEMSCLOSEOUTSOPEN BOX
SIGN UP & SAVE
Join our Email List
Get access to exclusive discounts, the inside line on the latest gear, and personalized recommendations from our staff of avid riders. We never share your email or personal information.
X 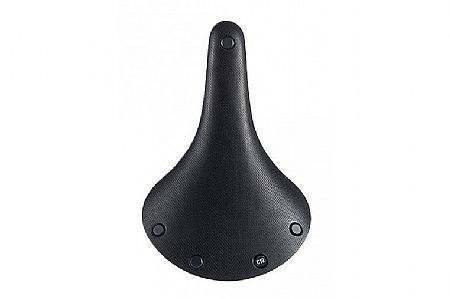 After a year and 5,000 miles, the C19 Cambium All Weather had become my new favorite saddle. I had for years bounced between B17s and various models by Selle Anatomica, but I grew tired of maintaining their leather and (more importantly) of replacing expensive saddles when they inevitably failed under my 6'5" 220 lbs frame.

Enter the the less expensive and (so far) more durable All Weather Cambium. I have to admit that I started out with the "carved" version, but quickly discovered that the missing material in the center actually ended up causing more pain in the ol undercarriage rather than less, I believe because it allowed me to sink a little further into the saddle and roll forward into the hard plastic nose. Once I made the switch to the standard C19, I was much, much happier.

So far, I have had to tighten the rivets once after they began to work loose and cause some squeaking; but other than that, the saddle still looks and feels like new, despite plenty of exposure to the sun, snow, and rain. All in all, I think this is a great saddle for those who are on the heavier side and put in plenty of miles in a more upright, touring position.

Was this review useful to you? Yes/No
Thank you for your feedback.
Brooks C19 Cambium All Weather Saddle
by Brian M. Oldham
Daily Commuter
San Francisco, Ca
2 of 2 customers found this review helpful.

This seat is perfectly made as you would expect from a 150 year old company steeped in tradition. These seats are made in Italy but if Brooks puts their name on it, then it should be good. It is exquisite in finish, form, and materials. The seat looks rock hard when you take it out and it was only when the seat was mounted on the bike and i leaned on it to move the bike that I felt the flex. I have an upright seating position on my bike and that's why I got the C19. I've been on this seat for over 200 miles with the longest ride of about 22 miles. In the riding ive done I have found this seat to be very comfortable. It supports my weight and is smooth enough to move around on while riding. I think it looks sharp and adds to the esthetic of the bike and it rides very well. I ride with no pads and still find this seat to be comfortable even when I do a ride that incorporates lots of stops and getting on and off. The seat performs well in traffic. I stop for my turn in traffic and so I get on and off a lot just to keep my place in a traffic line. No problems doing that. My only wish is that it came in a color.

Was this review useful to you? Yes/No
Thank you for your feedback.
Great Saddle
by THarms
Cycling Enthusiast
Chicago, IL

Bought this saddle for my wife on her bday. She has a fairly upright bike so I bought a C19 (instead of C17) and also bought the rubber one instead of leather just for the all weather feature. So far, she likes the saddle and it's much more comfortable than her old one.

Was this review useful to you? Yes/No
Thank you for your feedback.
Very comfortable saddle
by laidbackguy
Cycling Enthusiast
Arkansas
2 of 2 customers found this review helpful.

I have had a very difficult time trying to switch back from recumbent bicycles to upright bicycles. My back requires I sit nearly upright. I went through well over a dozen saddles including several Brooks saddles. before I purchased this one. I have been very pleased with the saddle on rides of 20 miles. I have had no significant pain. I have not toured with this saddle, although I plan on it. i feel the extra width is essential for the near upright rider. The saddle seems sturdy but somewhat flexible. I feel this saddle is great for the upright rider.

Was this review useful to you? Yes/No
Thank you for your feedback.
Excellent design & typical Brooks quality.
by knjc68
Cycling Enthusiast
Western Nebraska
7 of 8 customers found this review helpful.

The comfort of a broken-in leather Brooks, but without the need to maintain or protect from getting wet.

Was this review useful to you? Yes/No
Thank you for your feedback.
Comfortable from mile zero
by Chris
Cycling Enthusiast
Santa Cruz, CA
1 of 1 customers found this review helpful.

This Brooke saddle is perfect for my round town bike when I'm not always chamoised up. Broadly supportive and comfortable, water-proof too.

Want to save on all your TriSports purchases? Sign up here for exclusive discount offers. 43