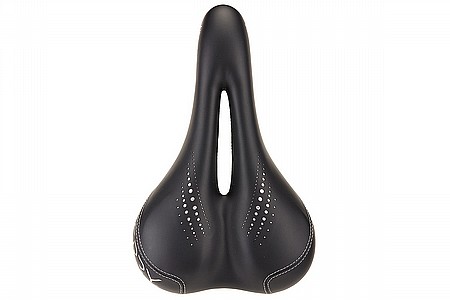 I have always been a fan of Terry saddles in fact all my bikes have a Terry fly mens.

I purchased this saddle as a gift for my girlfriend after a couple rides she was in pain thought it might have been too much upward saddle tilt but in the long run looking at the anatomical shape there is a slight rise in the saddle at the nose, in front of the cut out, which is directly where she is experiencing discomfort she also said that the gel padding was rather hard not soft and cushy as expected the saddle itself is rather large Terry should operate in small medium large to fit different size hips.

I'm planning on switching out for a flatter more race type saddle.

Was this review useful to you? Yes/No
Thank you for your feedback.
Terry saddles are the way to go!
by Susan
Cycling Enthusiast
Santa Cruz

I purchased the Liberator X Gel model for my around town bike and it's perfect for my needs. It's a comfortable saddle and I have no complaints. Terry saddles are consistently very comfortable. Thumbs up!

Want to save on all your TriSports purchases? Sign up here for exclusive discount offers. 16