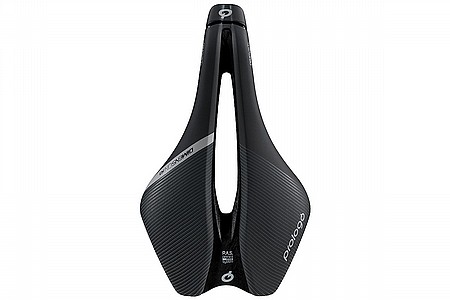 I have used 3 different "pro-grade" Specialized Saddles (SS) in the 143 mm width for the past 15 years or so, and they were all very similar in the shape and feel to the Prologo Dimension, other than the Prologo which has a short nose. The first SS rail broke, and was replaced under warranty, the second SS saddle plastic base broke and was not warranted. The third SS is going strong and feels very similar to my new Dimension saddle, which has just a bit of padding...not too much.

Having a seatpost with a bolt in front and one in the back allows getting the seat angle correct for your comfort and they don't slip like some single bolt posts.

Was this review useful to you? Yes/No
Thank you for your feedback.
Happy Buttocks
by Redmond Rider
Cycling Enthusiast
Redmond, WA

My first experience with a Prologo saddle so I was a bit wary when I ordered this item. I previously used a Selle San Marco Era followed by a Fizik Arione. The Selle San Marco provided me with years of pain-free riding but finally wore out and is no longer available. I had high hopes for the Fizik Arione but it simply did not match my backside and became increasingly uncomfortable. Based on glowing reviews from several of the major cycling websites, I decided to give the Prologo a try even though I had never ridden a short-nosed saddle with a wider width than I was used to. Within a few miles, I knew this saddle was for me--firm yet supremely comfortable. Short-nosed design means if you like to shift your seating position during different phases of your ride--I don't--then it's not for you. My rides are typically 40 - 60 miles long. During the summer months I'll ride three to four times a week. I'm a small-to-medium framed individual weighing about 130 pounds. Other pluses: very lightweight and the saddle seems well-made. I'm very happy with this saddle and cycling is a joy again.

Was this review useful to you? Yes/No
Thank you for your feedback.
Very comfortable ride
by Anonymous
Cycling Enthusiast
Longwood, FL

I was just noticing the other day how comfortable this saddle is. Smooth top with great shape for smooth pedaling. Good after a couple hours on the saddle.

Want to save on all your TriSports purchases? Sign up here for exclusive discount offers. 10