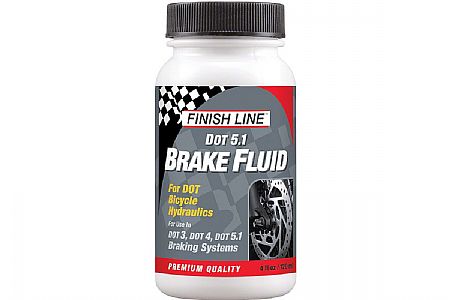 After a few years on hydraulic disc brakes, I'm settling in to not bleeding, but replacing the fluid about once a year. It takes no more effort, costs only a few dollars, and guarantees you a problem free year. This fluid is a few dollars less than the SRAM branded one, and as far as I can tell performs exactly the same. The bottle has enough to replace both brake lines' fluid, with enough to spare for a bleed in case you goof up (as I did, introducing air unintentionally). If you think you'll get a bargain by getting automotive DOT 5.1, beware that once opened, the product is only good for a year anyways, as it absorbs water from the air. Be sure you have the right fluid - some systems (Shimano for one) use mineral oil and the two fluids are not mutually compatible.

Was this review useful to you? Yes/No
Thank you for your feedback.
Does the trick
by OaklandMark
Cycling Enthusiast
Oakland, CA

After a few weeks with squishy hydraulics, I finally bit the bullet and bled the brake system. As it turns out, the old fluid had deteriorated, being quite discolored, so i ended up doing a replace and bleed instead. This Dot 5.1 fluid seems a little paler than the SRAM branded bottle I had previously used, but I could be mistake. At any rate, it's a little less expensive. A word to the wise - if you are tempted to buy a larger container at the auto parts store, realize that once open, the stuff is not usable beyond a year, as it absorbs water from the air. So unless you either bleed your brakes very frequently, or have a fleet of bikes that use Dot 5.1, it makes more sense to stick with this small bottle. I replaced the fluid front and rear on my SRAM brakes, and there appears to be enough left for one wheel's bleed should i need it.

Want to save on all your TriSports purchases? Sign up here for exclusive discount offers. 24