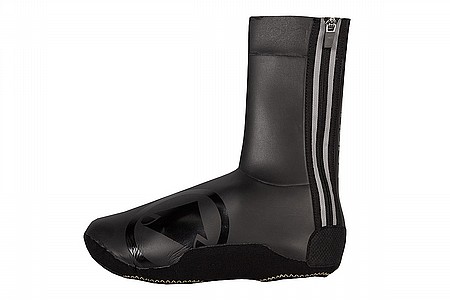 I bought these booties and hoped to wear them over my Shimano RX8 MTB shoes which have aggressive lugs on the sole. I like the quality of the booties, But when I first tried them on, I could not clear get the rear cut-out to clear the heel lugs. I was initially disappointed, knowing that the next size up would be too big. Before I gave up and pursued a return, I decided to see if they would stretch. I wrestled them on the shoes without me wearing my feet in them, and left them alone over night. I took them them off the shoe after about 12 hours and put them back on while wearing the shoes and they were much easier to put on. It still takes some work to get over the lugs because they catch, but I'll be fine and road shoes should have no problem.

Want to save on all your TriSports purchases? Sign up here for exclusive discount offers. 93